For those under any confusion, i am the titular idiot not your good selves. What follows are the rules i intend to use to play my new campaign (one i have been painting my 12mm forces for):

(a sneeky peek of the intended campaign for you, i will post about the background shortly!)

But first , as is tradition around these 'ere parts:

Say what you like about Nu metal, this album is still good!

Right, now to the thing the post is actually about:

MY ADAPTATIONS TO A RULE SET THAT DONT NEED THE LIKES O' ME FU**ING WITH IT!!

The campaign will be based on the fantastic: 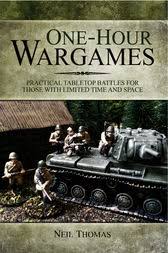 Just to be clear, you will need a copy of the above mentioned One Hour Wargames by the honorable Mr Neil Thomas to have any idea what i am about to bang on about!.

Right, basically the games i will be playing will use a mash up of the Dark age and Medieval rules from the above mentioned rule book with a few tweaks to 'fantisify' them. Use the rules set out in One Hour Wargames unless contradicted below.

Troop types: The troop types used are all the types in the two sections being used plus a few more added by myself. I have brought them together in this summary to show what they do: 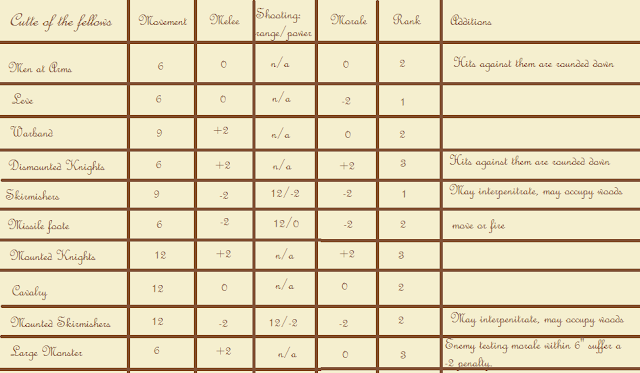 As you can see the basic troop types are there as is (except the Archers have been renamed and are not quite so effective. I have added the additional 'bits' of Morale and Rank, more of which.....

.....here actually!. Play through the rules as are but when you get to the Eliminating units phase replace it with the following:

4. Test Morale
Any units that have received hits this turn must test morale. Do this by rolling 3d6 for the unit and adding the results together along with any mods listed under Morale on the table above. If the total is equal to or greater than the total number of hits the unit has received they pass the test and remain in play. If the score is less they have routed!, remove the unit, it is eliminated!.

A unit will only test once during the phase even if they receive more hits during it due to routing friends, it is up to the player which order he tests his troops morale so be careful!.

The commanders stand is just there to show they are with the unit. All measurements are taken from the unit.

COMMAND POINTS
At the start of the Movement phase roll 1D4 for each commander, the result is the number of command points the commander has this turn. You may spend a command point  at any time during your turn to do one of the following:

You may keep re-rolling the same dice by spending more Command points if you wish. Once a point is used it is discarded so use them wisely!.

CHOOSING AN ARMY
Rather than using the random tables to generate an army (i have rather broken them by adding so many troop types!) you must spend points to pick the force you will use. The number used to determine the units value is their Rank score from the table above. I find it is best to play with between 10-15 points for a basic game depending on how big you want it. 20+ points would give an epic battle!

Choosing Commanders
You may take one free Commander as your force leader.
You may add an additional Commander for each 10 points of your force (or part there of) for 2           rank points.

MAGIC
You need magic in a fantasy game i reckon!. I am going to go with my tried and tested explanation of the whys and hows (see here) as it still feels the most 'believable' thing wizards would do! (yes that is how my head works!).
To include magic in your force you must spend 1 rank point for each spell scroll you wish to order from the S.T.P.W.T. To see if they are delivered roll 1d6 for each spell. On a roll of 1 the spell has failed to show up on time, thats a rank point down the bog! (bloody lazy warlocks!), on a roll of 6 they have accidentally sent an extra scroll! (wizards are great after all!). Thats one more spell you can roll for nothing!.

USING MAGIC
Each spell is sent in the form of a scroll with the casting requirements written on them (phonetically thank the gods!). Each scroll needs to be assigned to a commander before deploying your army (keep a note of who has what). The spell may be cast during the battle by that commander. Once a spell scroll has been used it is discarded. Ranges are measured from the unit the commander is with.
Note: Commanders may hold any number of spells and may use any number during a turn, once the spells have been used they are gone!.

The Spells
Roll 2d6 for each scroll before you allocate them to see what you have:

3-Sour ol' Saul Saturates So Soothing Sense of sootheration (not tested on animals....well maybe the odd troll but who cares about trolls eh?)

Cast this at any time on a friendly unit within 12'', that unit may remove half their hits (rounding up).

The spell is cast on a friendly unit within 12'' during the Hand to Hand combat phase. The unit may double its dice roll in combat this turn. However if the unit rolls a 1 it goes into a frenzy and attacks itself as well, in which happenstance roll the dice again and apply the number rolled as hits to BOTH units!.

Cast this spell on a friendly unit within 12'' during the movement phase. They may pick one unit (friend or foe) within 12'' of themselves. The units will automatically change places!. You may place the units facing whichever direction you wish and if the unit is yet to move this turn they may move after switching places. however you must roll 1d6 for the friendly unit you wish to cast the spell on before the units swap places. on the roll of a 1 the unit is lost in the winds of magic and instead of swapping places they are eliminated! .

Cast in a friendly unit within 12'' during your move phase. the unit may move twice this turn.

7-Likely Larrages Luxurious lather of unrefined luck. (use in a well ventilated area)

Cast this on any friendly unit within 12'' at any time that is about to roll a dice. They may count the roll as a 6 without actually rolling the dice!.

8- Carmudgenly Carlos' cloude of confusing colours (not suitable for vegetarians).

Cast in the enemy movement phase on an enemy unit within 12''. That unit may not move, fire weapons or attack in close combat this turn!.

9-Unlikely Uncle Ulicarrics ultra unlucky luck reversal remedy (all similarities to existing spells are purely coincidental)
Cast this spell at any time during the enemy turn on an enemy unit within 12''. The next dice roll that unit makes is automatically a 1. The enemy may not use Command points to re-roll the dice.

Cast this spell on a friendly unit within 12'' during the shooting phase. The unit may fire twice with any missile attacks they may have. They may fire at the same target or two different ones.

11-Delphine Duconitys Durable dose of double 'ard bastrdry (part of a multi-pack, not to be sold seperately).

Cast this spell on a friendly unit within 12'' during your opponents turn before they are attacked with missiles or in hand to hand. The attack is discounted and is ignored. No damage is taken.

As you can see i have gone for some pretty powerful spell effects to 'pep' the game up!. This means magic will have a large effect but is one use and provides another good reason to take out the enemy Commanders!.