The battle of Phlemm Valley (again)

Right, this might be a long one so i will be cracking on. This post will contain an apology, some music and a (gosh darn honest to goodness) battle report!....in that order!.

First i need to apologize to not only you fine people but to my inner gamer himself (he's a twat but....). Why?, well this is the first time i have got minis on the table for a game since sodding JANUARY!!!!. Yep, you read that right, i have done zero, none, nada, fu*k bloody co*king all gaming for almost a blimmin year!!. I am now sorting myself out!!. More games will follow (im sure.....ish...). For this i am sorry.

I reckon that'll about do it!.

THE BATTLE OF PHLEMM VALLEY

The following is taken from the book 'What do you need two wannabe kings for?' by the esteemed hispurian Dr Phillip Ostenhousensen and is produced without permission, mostly because hes dead (kidding):

......'And so Tuttinghammeshire marched to the border, the Earls declaration of war spurring on several Lords to rally their troops to strike the enemy under the command of Sir Physs. In reply the King in the interim, one Glinric Pallenbrooke also raised his armies and ordered mobile scouting groups to patrol the border fearing a probe from the enemy would be imminent....he was right. On the morn of the 2nd day of the war a mobile Force under the control of Sir Plantah advanced to secure the sheltered valley of Phlemm, a little trodden area between the two shires, it was from here Tuttinghammeshire planned to move in force but first they had to secure and fortify the Valley to serve as a staging post for the action to come. It would have been plain sailing had not one sir Finnagree the clenched and his mobile patrol spotted their movements and although outnumbered moved to head them off. Sir The Clenched sent messages to all surrounding forces to raise some support, the call being answered by one sky captain Sir Crowsfell. Crowsfell moved with all haste to the aid of the mobile force...but would he arrive soon enough?.' 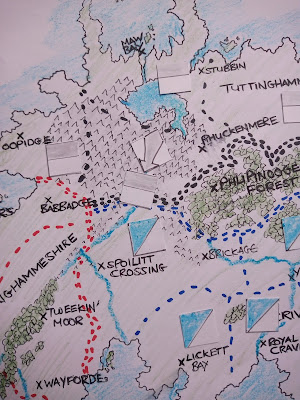 Yep that just about sums up the situation.

First some important information about the valley itself: 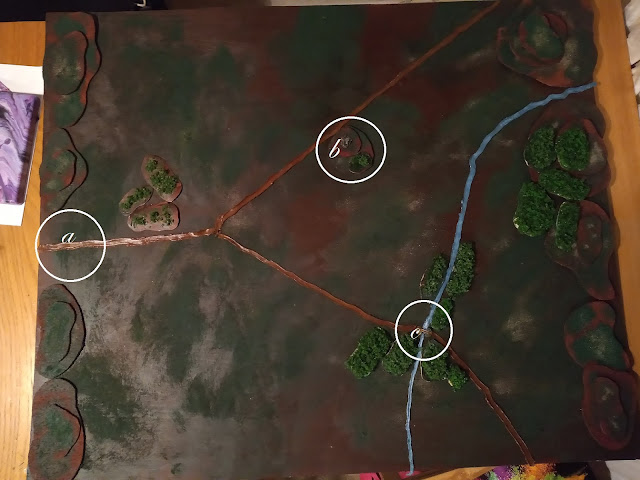 Phlemm Valley, worth fighting for??!.

The valley is situated to the south of the Crippled Jaw Mountins on the border between the two warring shires. It runs parallel to and about fifteen miles from the far more popular Clemm valley, a popular trade route complete with services and camping areas. As such Phlemm Valley is little used except by those not wanting to be known to be travelling. It was for this reason it was chosen by Sir Plantah for his probe. The valley does have some points of interest that proved to be important as the battle went on. They are marked on the picture above:

a: Douchee pass (on the left hand side). A key route linking the valley with Clemm, the road between the two being a key path for smugglers and other ner'do wells. It was here that Sir Crowsfell and his relief force made his entrance.

b: The abbey of the brothers of Sir Dagnabbitt. The abbey was built by one Abbot Kligger and is staffed by his three brothers (who also insist on being abbots rather than more common brothers...and are bigger than Kligger). It is said that it was built after Kligger was visited by a vision of Sir Dagnabbitt on the morn after an especially violent pickled egg and turnip wine session, the spirit of the long dead monk appearing through the fugg to order Kligger to build the abbey and bring his message to the people of the valley. Kligger enlisted his brothers and set to work, failing to realize the valley was actually unpopulated. To this day he secretly wonders if he caught the right name of the valley in which he was ordered to build.

c: The Shpitty river bridge, owned by Flowthru crossing co. The bridge is situated to be a link between the valley and the small trading towns to the south east of the mouth of the valley. As with all of the Flowthru co's Bridges it is staffed by a single old Spinster and a small army of vicious and highly trained toll recovery cats. The co always choose only the bitterest spinsters to staff its facilities, training them in the use of shame via the use of the acid tounge to disarm and discourage all that cross into paying their frankly astronomical tolls. It is said the withering stare and sharp barbs of a trained Flowthru employee can strip tack from a horse at 3oo yards!.

These important points provided the objectives the Fossestershire force wished to control to assure they would be able to use the valley to launch further attacks.

Sir Plantahs probers of the Valley 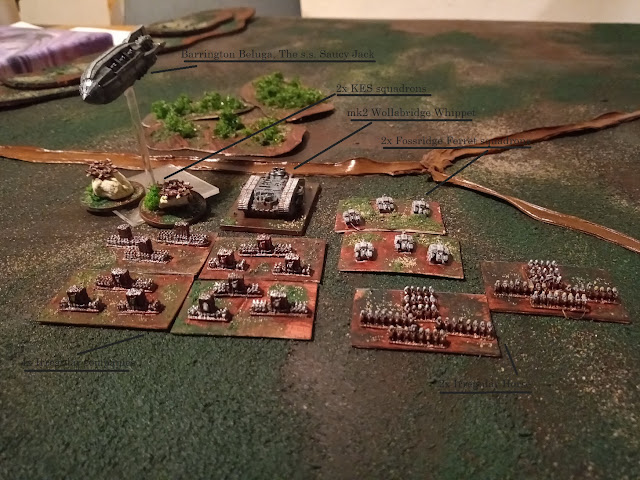 You will need to click on the picture to read the blatherings within (sorry). It is worth noting that two Irregular companies were mounted in the Whippit and two in the Baluga. 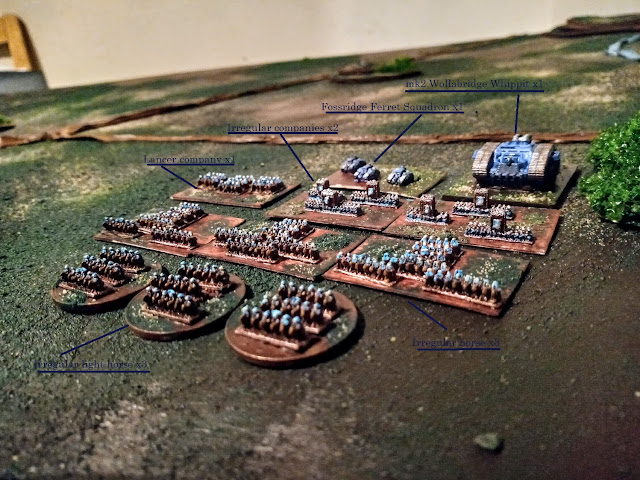 Again click to make head or tail of it, the two Irregular foot are mounted within the Whippit. 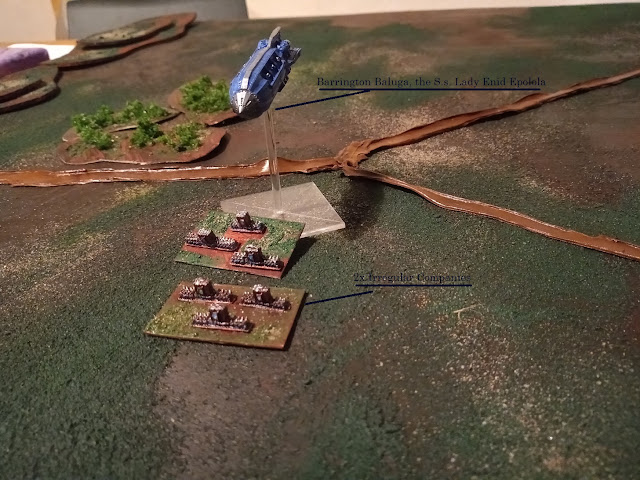 As before, the Irregulars begin the game within the Baluga.

I am using a (still being) adapted version of G.W.'s old epic rules for this game. Both the Tuttinghamme force and Sir the clenched's troops began the game off table, moving on on the first turn under advance orders. Sir Crowsfell would turn up at the start of a random turn through Douchee Pass. Victory went to the side that controlled most objectives (pass, abbey and bridge) at the end of 5 turns.

TO RUDDY BATTLE:
The chuff of steam engines could be heard above the birdsong as the sun rose above the eastern ridge of the Valley, bringing both sides into battle. From the south the Crivenshire force advanced as one. 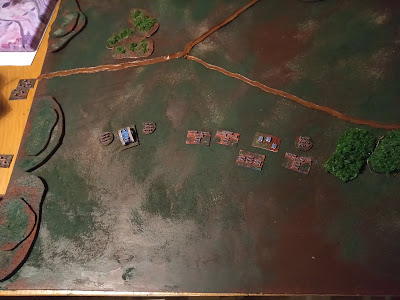 Crivenshire arrive into the Valley.

To the northern edge the grumpy Tutters roared! 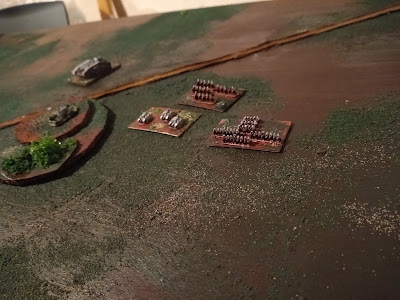 A partly mechanized force in the center. 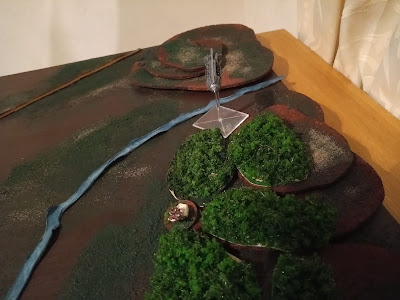 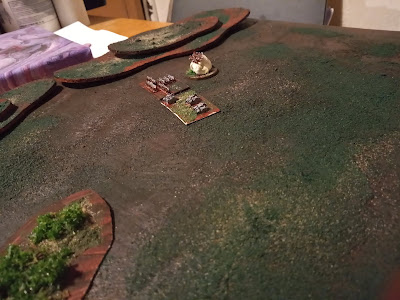 While a fast attack force headed for the Pass. 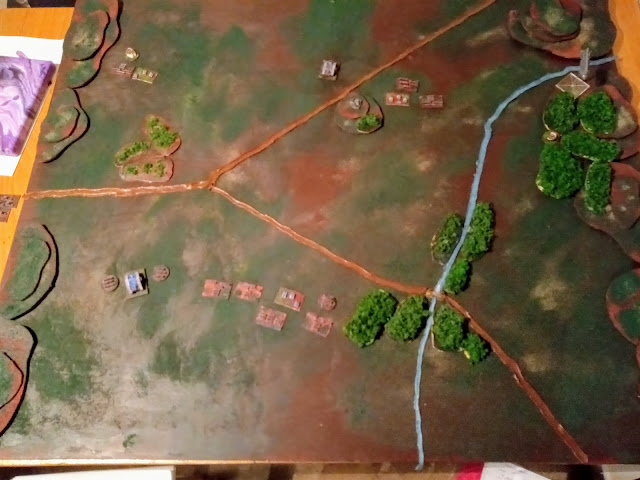 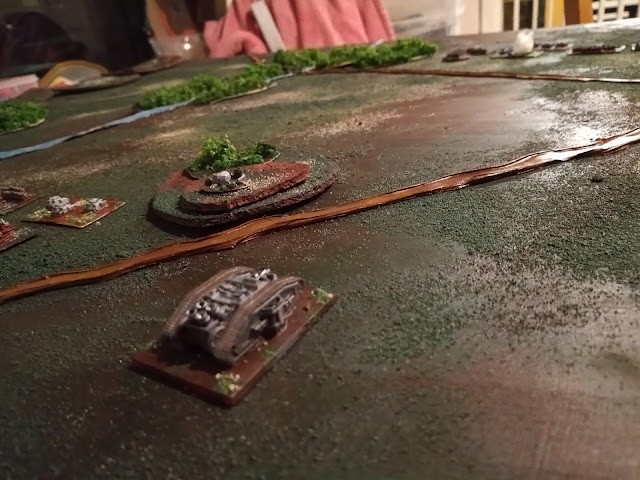 The Tuttinghammeshire Whippit fired some pot shots at the distant enemy lines. 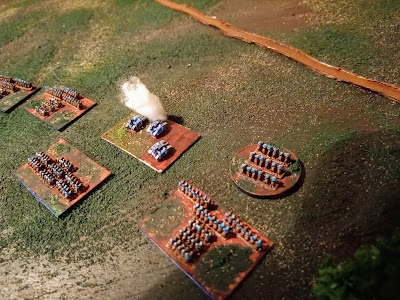 Taking out the Crivenshire Ferrets before they can get a shot away!. First blood to the north!!.

Turn 2 begins with further advances from both forces, racing to claim the objectives. The Crivenshire Whippit sped up to the Pass, its passengers jumping out to secure the objective. The covering fire of the t.a.n.k and its supporting light horse wiping out the advancing Tutters!. 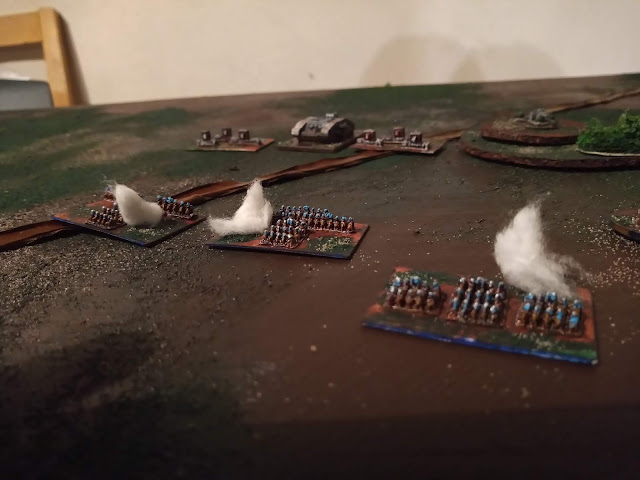 Not to be outdone near the Abbey a withering hail of fire from the Tuttinghammeshire Whippet and its disembarking irregulars cut down the opposing cavalry force barreling towards them!. 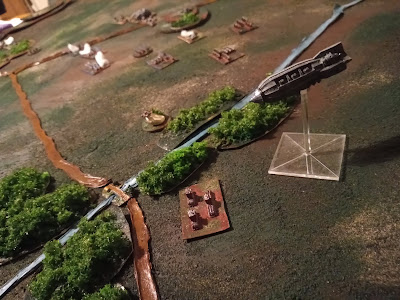 The bridge is soon secured by the Tuttinghammeshire airborne troops!.

The third turn begins with a cheer from the Crivenshire forces as the S.S Lady Enid E appears through the pass! 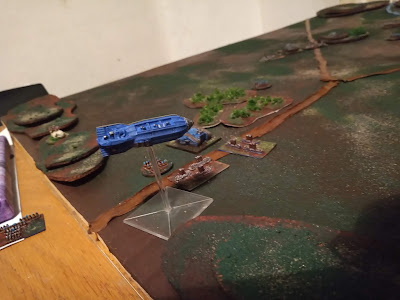 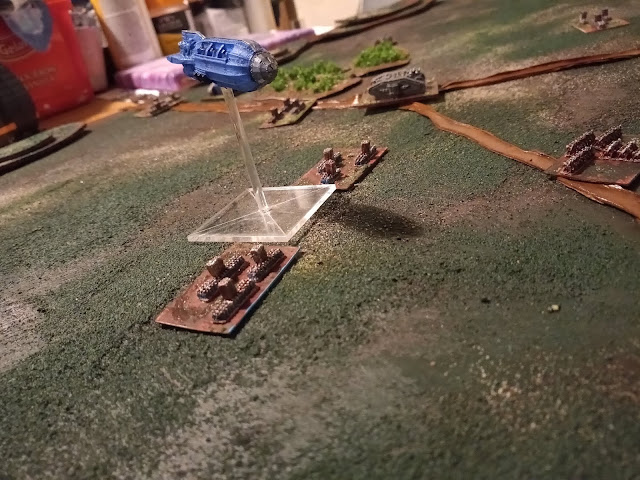 And drops his troops in the center of the valley to oppose the forces at the bridge. 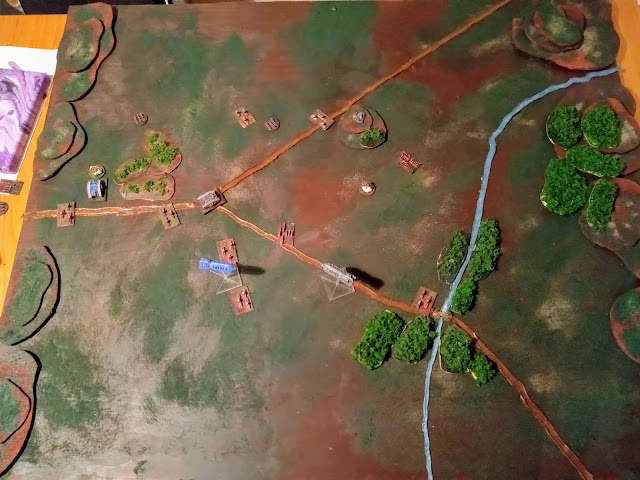 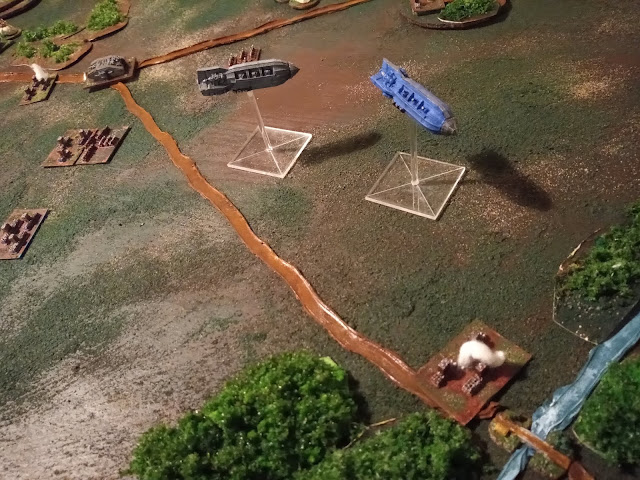 Air Crivenshire wastes no time in destroying the troops holding the bridge, but in the background the Saucy Jack comes about...

Around the field Crivenshire have some successes: 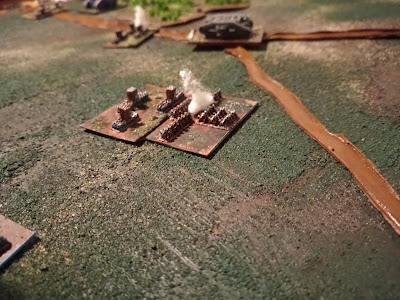 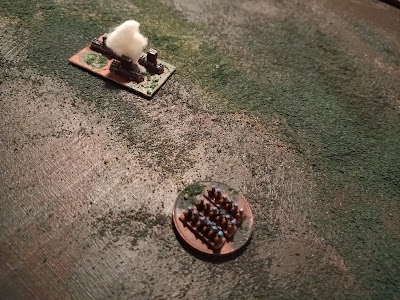 But for every enemy they kill... 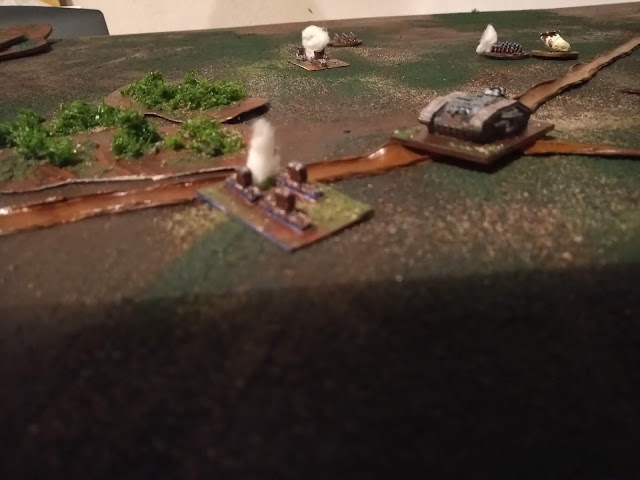 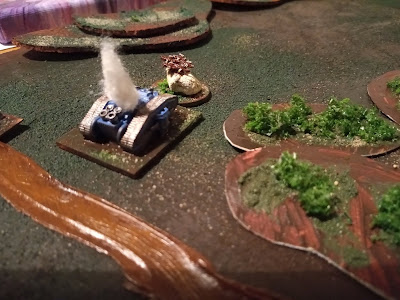 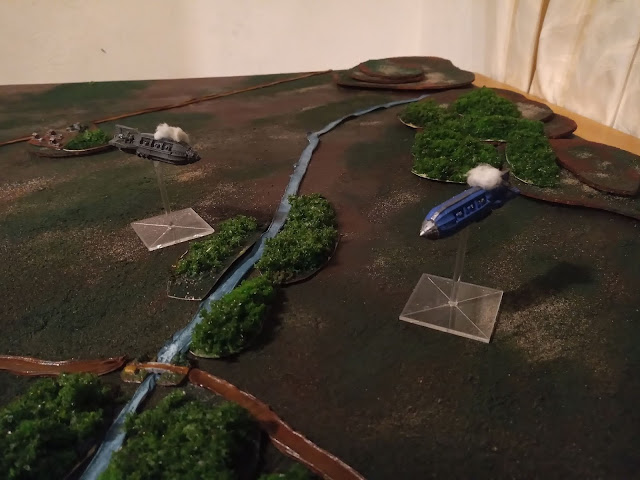 Both Beluga airships landing hits on each other spelling doom for both!. 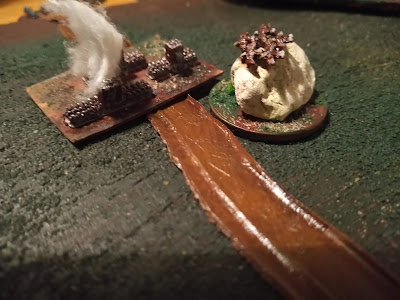 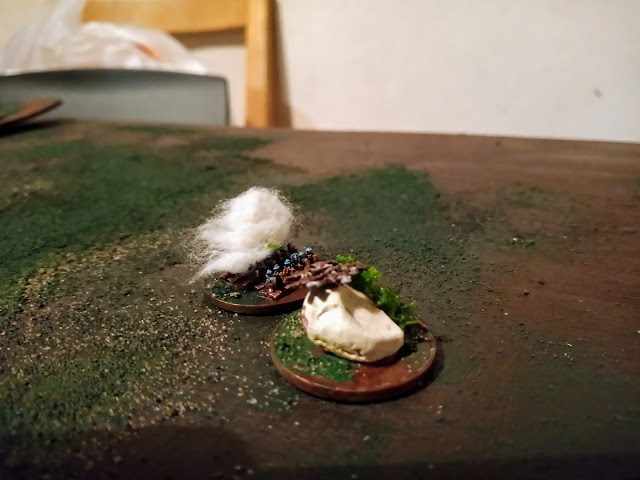 And the KES prove their worth by finishing the Crivenshire resistance. 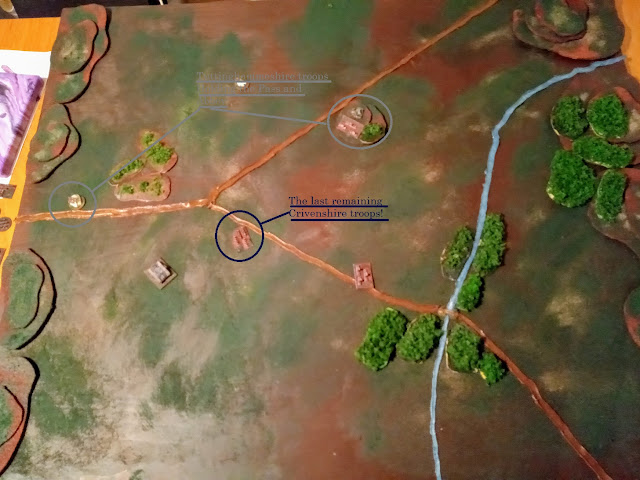 The situation as the battle ends.

So a victory for Tuttinghammeshire!,

I cant believe its been so long since i played a game...what a tool!. Well thats the campaign well and truly kicked off!. What will Crivenshire do now the north have invaded, how  will the other shires react?, will i remember to draw some O.F.F.S cards next battle?! find out these things and more next time when we play more:

Before i pop off i want to give a hearty Wronghammer Hello and welcome to the chaos to Wouter Wolput and Airbornegrove26.  Mr 'grove26 writes the brilliant Give 'em Lead blog, check it out its great. I cant see a blog listed for mr Wolput but then i'm rather behind on these things so if you blog sir please feel free to pop a link in the comments so we can check it out.....