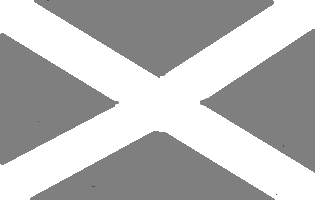 Just another of my quick posts to point you in the direction of more background material written with my whole fantasy pike and shot type bits in mind. This time its the turn of the grim northern types from Fossestershire. Click here (or on the relevant tab at the top) to peruse the collection of grumpy men and beasts (and i think what must be a record number of 'bastards') held within. As with the page on Crivenshire i have included all the rules needed to use the army in my 'One Hour in Olde Albilande' rules for Neil Thomas' fine 'One Hour Wargames'. Anyway, have a look and as always comments are welcome. 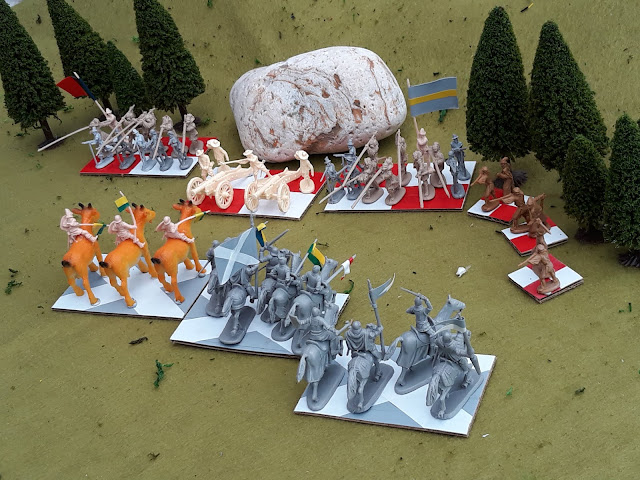 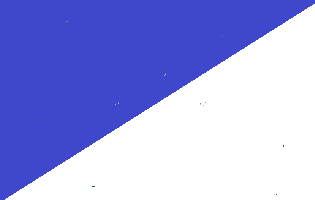 The revered colours of  CRIVENSHIRE you unwashed pleb!!.


Just a quickie to point you in the direction of the tabs at the top of this page (not the very top of course, just below the header or you could click here which will get you to the designated destination). I have bashed together some 'fluff' i believe the cool kids are calling it for the first shire in the ongoing campaign setting i have been building for far too long!. Thats right, i finally have something solid to show for it!!!. The page details some bits and bobs to give a feel of the character of Crivenshire and some rules for including some famous and unique troops that march to war with them in my One Hour Wargames variant!. Please feel free to have a peruse and as ever any comments are welcome. 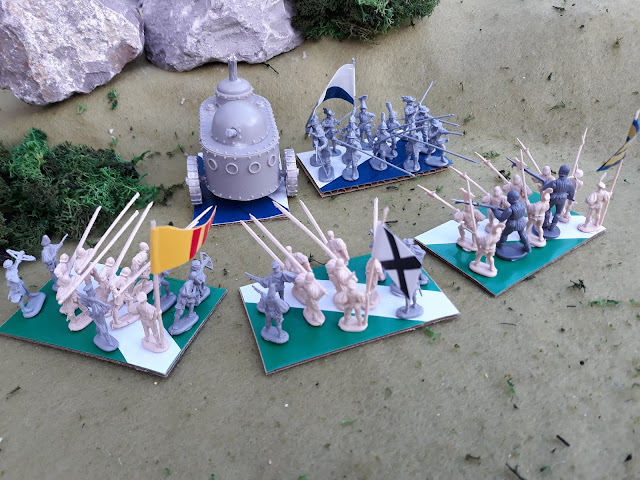 Belching Bessie and the Kings Regulars give some Berkinshire scum what for!!.

Email ThisBlogThis!Share to TwitterShare to FacebookShare to Pinterest
Labels: About an 'aur guv!, By Crivens!!, DIY, eh?, mwah hah haaaa!!!!

A futile exercise in turd polishing!

Hello all, just a quick update to say i have tidied up my fantasy pike and shot add on bits for 'One hour wargames' by Neil Thomas by adding some pictures and bothering to spell morale correctly( you can check out the changes in the relevant tab above). I spent a while earlier on today taking a few 'arty' snaps with the help of the ever present Wronghammer re-enactment society ( all tastefully done of course!) to hopefully break up the 'dry' wall of text that are the rules i have bodged together, pictures a bit like this: 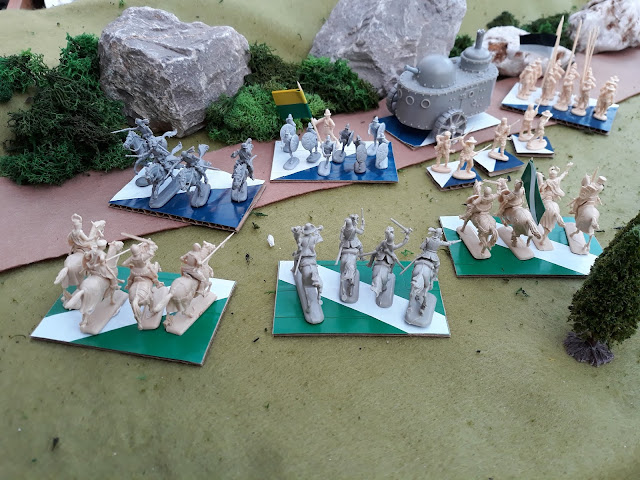 Nothing earth shattering but they add a bit of colour and context for the setting (i hope!).

On a different note i have been made homeless!!!. It began when me and the amazing Mrs Sprinks set the parental controls on our new updated wifi. All good (or so I thought) until I decided to log into this humble blog, apparently this little o' page of mine is BANNED under the settings!!. Its like getting home to find the bloody locks changed!!.

Can you believe it, the 15th of January already and i've done sod alls worth of gaming this year! (got Space Crusade played with the Sprinklings, which i am informed by them is AWESOME!!!!. and played a one hour medievel game with two of the little 'treasures'). I have in truth not been bothered to get stuff out, sort of a mini mojo gap i 'spose. I have been working on some bits and bobs for the 'One hour in Olde Albilande' ......err...stuff but when it comes to minis and dice i've been less than enthused. This has been nagging away at me, almost to the point where i have been putting myself off with too many ideas for game narrative i cant be arsed to do!. So i took The brave Kaptains advice and just get something simple on the go. What follows is the result of this, so without further ado i give you (and apologize in advance for):

The year was something like 1426 or so, two kingdoms were at war for some reason, probably politics or borders or some such, maybe the queens wore the same dress to some do or other....whatever you want really. The two unnamed kings sent their armies to do what armies do to solve the issue that was previously detailed above (sort of). The two forces met at a crossroads, probably of some kind of importance for moving troops and baggage and what not. Facing off against each other the two opposing generals knew that the honour of their generic nation were on the line, it was loin gurding time..... 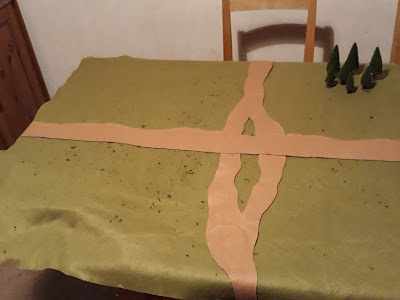 I used One hour wargames medieval rules for this one with my extra bobbins chucked in. I rolled each force up and got identical results. Both armies were made up of 3 units of Knights, 3 Men at arms and 1 unit of Leve. I decided that the objective for the battle was to hold the crossroads and the game would last 5 turns. Hows that for simple?. 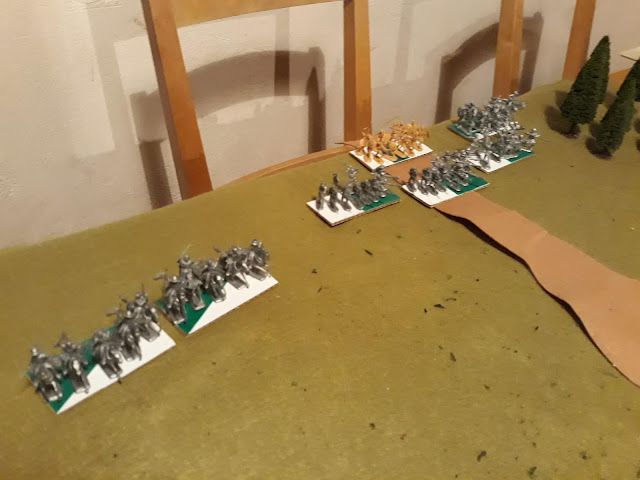 The army of the kingdom of Generica set up with the foot in the middle and  knights to each flank. 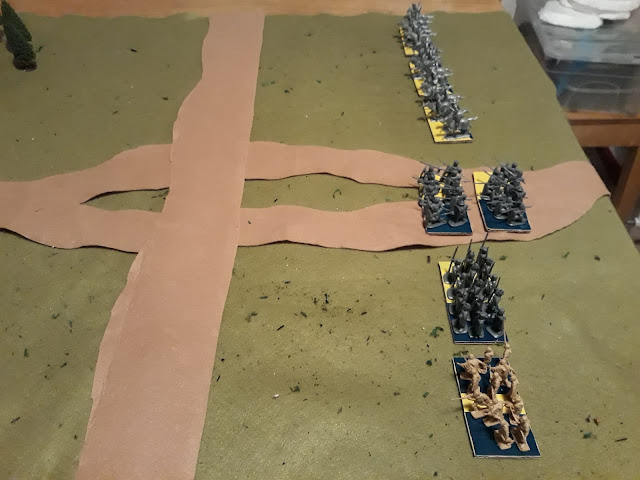 The opposition force of the kingdom of Lackofimaginatia with all the knights to their right and leve holding the left.

I failed to take many photos during the battle but with no archers on either side both forces just got stuck in from the off resulting in this: 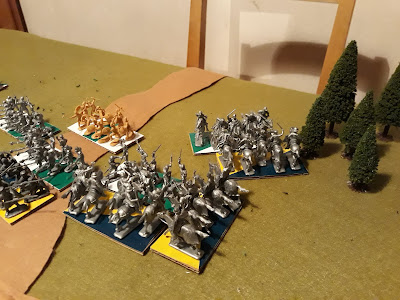 A medieval pile up!!. 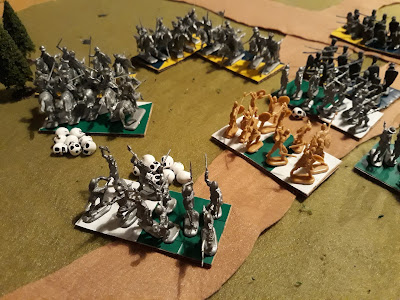 Men at arms head for some hills somewhere!. 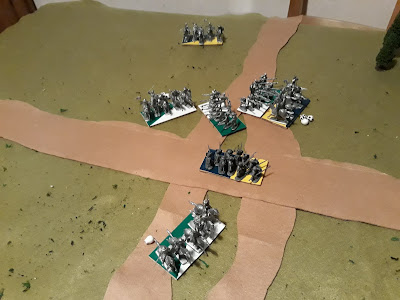 The whole thing boiled down to a scrum around the objective. 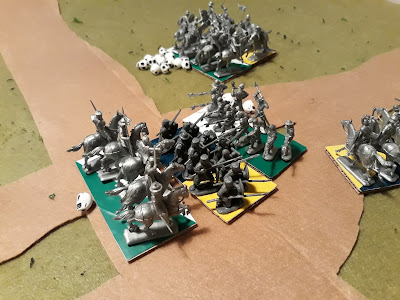 The turning point of the battle was the Lackofimaginatia men at arms holding the crossroads being charged in the rear by some knights of Generica, the men at arms fled leaving in in Generic hands. 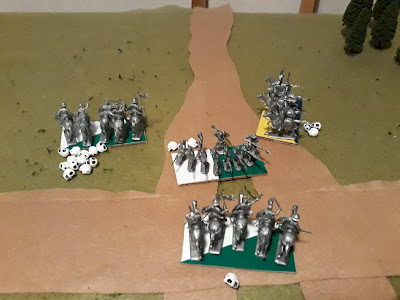 By the end of the mindless bludgeoning and needless decapitation the field belonged to Generica, only one unit of opposition knights left to tell the tale.

You know what, it was a very simple affair but lots of fun and im itching to go again!. I only used the boys armies because they were to hand but i may just play a few more games with them to create a narrative, god knows i have put my heart and soul into fleshing the forces out!. I also have to stress how simple the rules are but please dont be fooled by this, the simplicity by no means equals boring, the added morale rules sped the game up and add a sense of trepidation every time troops are attacked. The game also only took 25 mins to play to a conclusion so its ideal for an evenings campaigning.

Well thats hopefully the mini hump straddled, all that remains is to welcome Mr Steve to the unstructured mess of a blog that is this bloody mess you have been reading. Steve writes the rather great Sound Officers Call! blog which you should check out right now...go on, off you pop!.


Sooooooo, i have been working on my Pike and Shot and Fantasy rules for a while, honest i have!. However i have become rather distracted by:

This has filled my head with lots of 'what if'' ideas, mainly:

If you look in the tabs at the top of the page you will see a new tab containing all the rules required to play fantasy Pike and Shot One hour wargames!. Have a look and shudder at my ambitious stupidity!!!!.

There is more to add, the material is pretty rough, it needs a ruddy good tarting up so please excuse the mess and the Shire specific troops are yet to be added, i want to base and photograph them before i write them up so it may take a while, in the mean time the system still works for generic Pike and Shot. So please take a look, any and all feedback welcome!.