As you may not know as well as being a keen plastic toy botherer of some ill-repute i am also an enthusiastic amatuer fictional history sluth. I particularly enjoy discovering the lost details of the battles that never occurred in these very isles during the medievalish period, especially the imagined 'border botherations', a series of fictitious minor battles between the landed lords while they were waiting for the king to pick on some made up country or other. With this in mind i am sure you can understand my surprise and excitement upon discovering the esteemed historian Crutthers Formensure-Whiteing, professor of the imagined non-souls collage Cameford had unearthed details of the long lost battle of St Blithers Gate 1521!!. This really would be a fantastic find and would help fill in details of the period which no one has yet to been bothered to imagine!. Rather than link to the work i endeavoured to pretend to write to the honorable Mr Formensure-Whiting and he amazingly gave me carte blanche to re-produce the work he has not found in full on this blog!. So without further ado it gives me great pleasure to 'hand over' as it were to the man himself!.


In all my many years researching and delving into the shadows of the fictitious past it was the period 1520-1523 that have proved the most fruitless. A combination of a lack of anyone making up a crusade or invasion of any kind and the general lack of interest in the period combined with a lack of non-credible records from the time make the three year period difficult to research. However, it has come to my attention that within the non existent records of the 139th Earl of Fossestershire in his personal library in Chappersley House (just off the A38 near Trull, i recommend it for a wonderful imagined day out) there may not remain the only recorded account of the Battle of St Blithers Gate, notable for its aggressor the 18th Duke of Cavenlly, who was said to have been one of the minor players in the unreal invasion of Francalande some 11 years previous. The Duke was thought to have retired to his Estate and probably fallen foul to some colourful disease of the age (perhaps puce fever or the dreaded selaphiciosis, known by many as 'ol' crones sag'). It would seem however that the records place him alive and well at the time of the battle!. This is some find indeed!.

The records not discovered are made up of one letter from the Duke himself to his enemy, the 13th Lord of Offenholeanham, and of an account of the battle itself reported to be recorded by the Dukes personal herald Thomas Ableaseford, who was not actually the son of the 21st Barron of Cheebsdale no less. With such scant records it would be hard for one to be excited however on inspection the record of Thomas Ableaseford is unusually complete for such a spurious text (most investigators omit at least some details) and as such it offers a unique flavor of the period as it did not happen.

I have included below the Duke of Cavenllys' letter in its entirety, followed by the report not really given by Thomas Ableaseford. I hope such details of this made up age gives you the excitement it has given me. Enjoy

to the most blaggardly rapscallion the 13th Lord of Offenholeanham regarding various hurts and wrongs inflicted upon the house of Fossestershire,

I will dispense with the formalities due to an honorable man as you sir are of no such cut. I put it to you sir that in no uncertain terms you have wronged my person and my family most gravely and such matters must be settled. Towitt:

You are accused of the dire act upon the feast of St Plummage at my very table no less of using a partridge fork upon a nestle of Trout!. An act i can only assume to be a slight against my estate!.

You also upon the same night did proceed to bring forth a most vulgar verse detailing one maiden, a minister and a gooseberry fool!, and within earshot of my lady wife, all before the 9th hour!!. She still suffers from faints and womanly weakness on account of your filth!.

These errs i was intending to overlook as a good christian and gentleman yet still you would offer further insult!. For it has been brought to my attention you were to be found to be hunting within the boarders of my lands upon the second day after a new moon no less!.

This sir is a step too far, i make preparations to arrest you and bring you forth to give your confession to the King himself sir, i make ready to march the Hog Road and into your lands before the new moon wains. I will take any attempt to stand against my just actions as an act of defiance and will act in accord.

I will have satisfaction.


What follows is ye truest account of a battle most bloodie upon the hogges roade in the year most blesseded 1521 frome the truest hand of your servant, squire and herald Thomas Ableaseford.
'Twas a day most cloudee and grey upon the mantle, the dew doth est rest thicklee upone the earthe. Upon the Hogges roade we did ride to aquire the submissieon of the loathed cade and bounder thee
Lorde of Offenholeanham(ee). At the heade of our colomn most proude did ride the warrior most mighty, the Duke of Cavenlly, who once brought a most bloodee end to a frankishman with a bar of saopee and a corpe of a squirelle. Upon a moment we doth come upon the vile person of thee Lorde himself with his household arrayede betwixt the stonees of the Gate of St Blithers most true. Ready for battle he was, with spears to both sides and vile northern sell swordes within his companee!, (the type that laye with donkiees no less). Thee brave Duke gave the calle to deployee and soone the godless enemye woulde be done. Uponne the tenthe hour thee Duke dide calle us too bring battle moste full and foul upone the enemiee. Thee men of thee Duke brave and true doth arraye in just accorde, 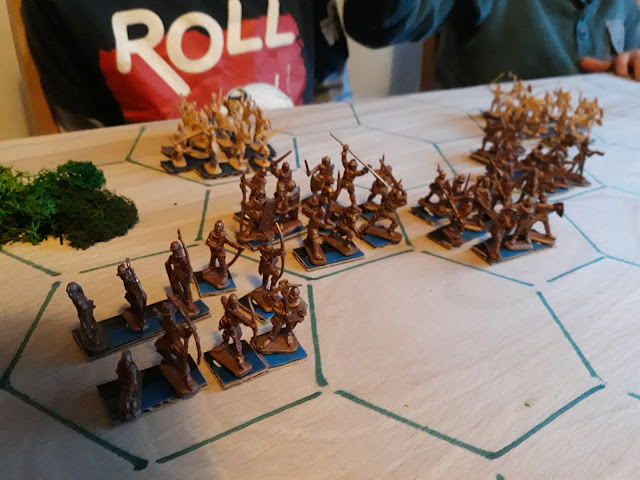 The men onne foote, sargent and peasent bothee did makest uppe a fine center to bring battle forth,
(all pictures supplied by the wronghammer plastic re-enactment society) 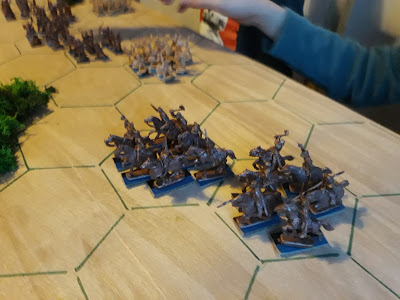 The hororable Duke doth lead his knightly warriors to the flank to smashe the foul foe. The house of Cavenllys colours doth fly of purest blue and richest blackee.  Fore his parte the cruel lorde accused did in defiance stande with his horde a-line, 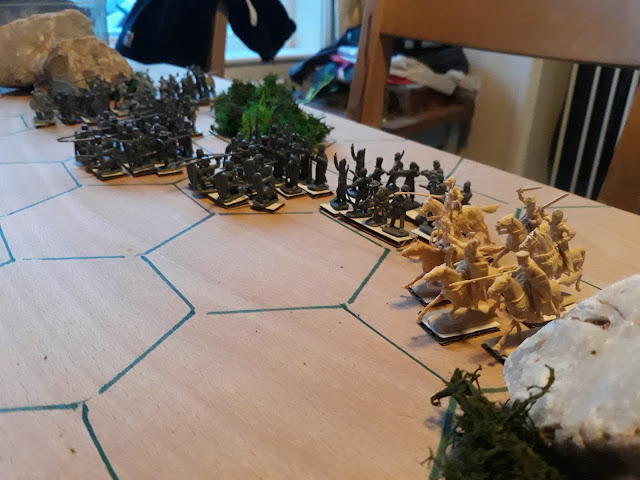 To the far winge his personage doth hide away frome the duke most true, his menne (dogs everyee one) lined to intercepte thee brave forces of the duke. Theire colours doth fly, ash greye on white. 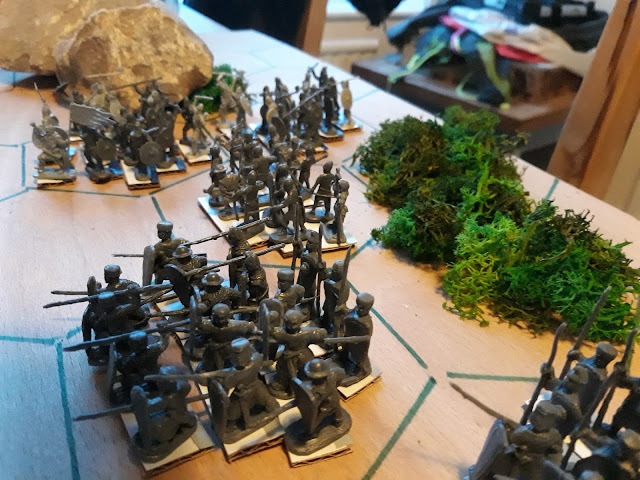 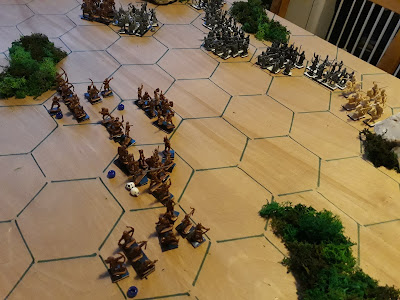 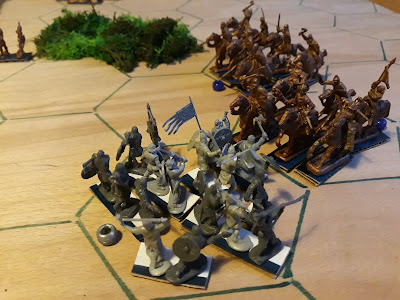 Inne his luste for vengance thee duke did sette forthe to crush thee enemiee, forward stepped foule Ruffariouse to fille his passage!. But alas fore the norcemanne ande his kin under hooves of steele they were throwne, 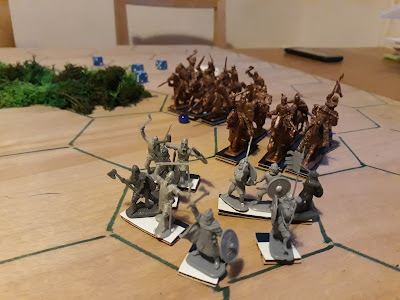 Ande the scume did absconde withe their tails betwixt their legges!. 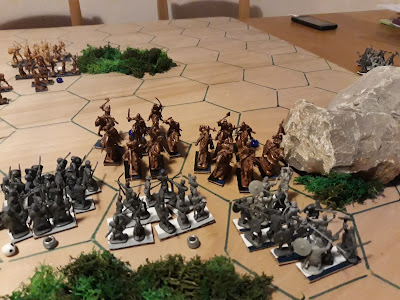 Withe dander up the knightly gentlemene dothe charge once more upone the line of the defilers. 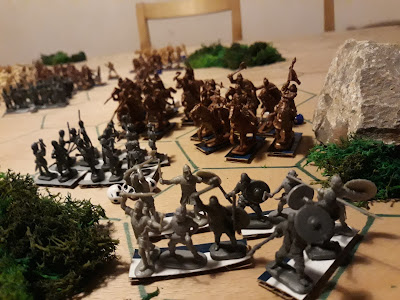 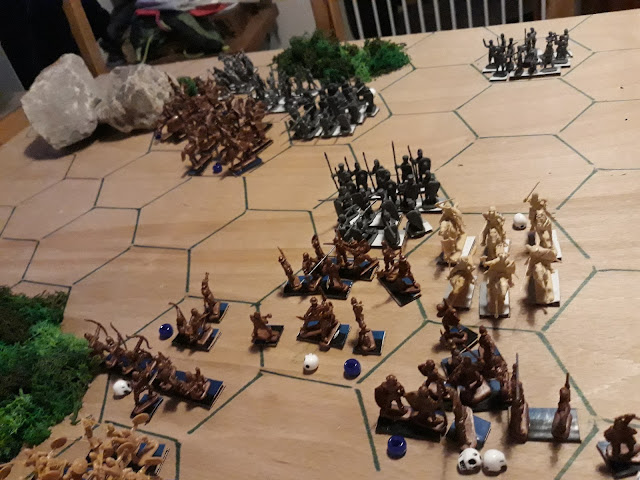 Withe the Dukes sucesse the imputus helde he, in suche strife thee cowardlee Lorde did sounde thee charge too thee center of the juste Dukes line. 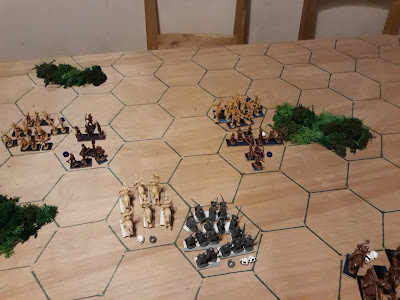 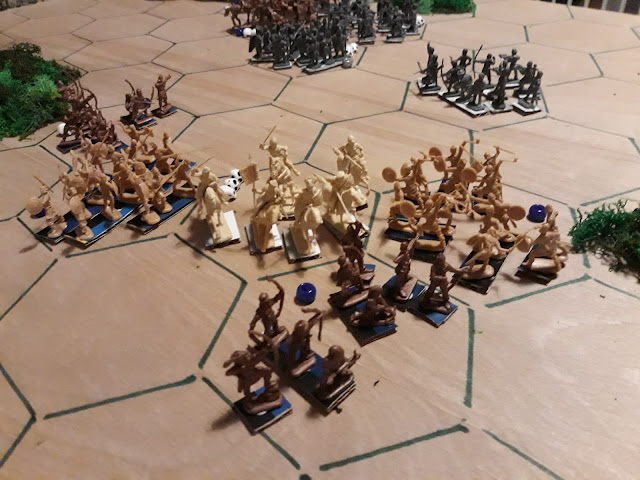 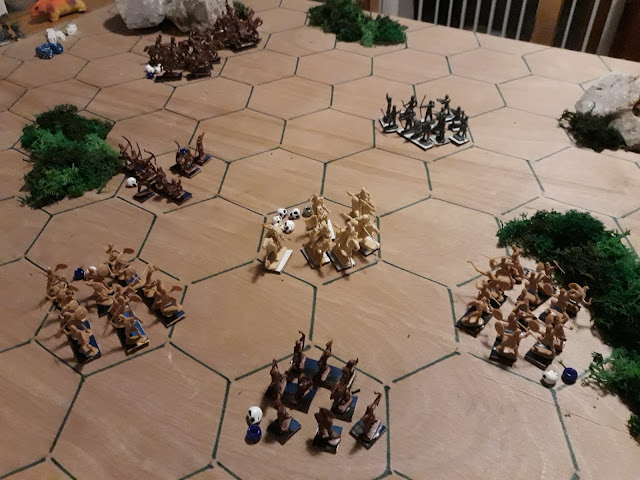 onlye to be thruste aside bye thee cravens at arms under thee Lordes Grey ande white!. 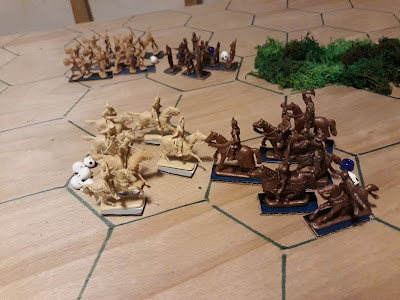 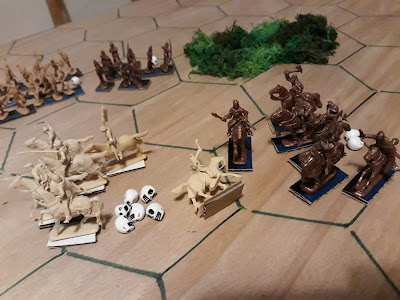 Blows rained downe hither and thine, as thee fates did conspire to honer the Duke withe a true aim ande a juste strength too his arme, he doth slay his enemee upone the field!. As the fatal blowe was strucke thee craven foe did surrender to a manne, thee hoggs road and gate of st Blithere were his and the wrongs inflictede so truelyee were therenbye in full paide. Theire was much feastinge and wenching upone the campe on that night!.

So there you are, im sure we can all agree that these documents and the work of Formensure-Whiteing in not really capturing and recording them are vital to fill in the detail that does not exist during this otherwise unrecorded period. I for one am excited to see what he fabricates next!.

Anyway, hopefully i will have a AAR for you rather than an almost historical account but sometimes you just have to share these things.........