From the ground up

My name is Sprinks and I have had a very stupid idea. If you are a regular reader of this den of douche you will be aware that my focus when it comes to gaming is a bit on the fantasy end of things. I have however lately become interested in more historically based gaming (not completely historical, I still like to make up silly stuff to bung in the gaps). Now the other day I was pondering how best to mesh the historical and the fantasy in a satisfying way, aside from calling it Fastorical or Histasy of course. Sort of a way to explore lots of periods of  military history without worrying about the stuff that seems to put me off, things like the minutiae of history (i like the wide view but am not at all bothered about button counting). So my stupid head came up with the idea to go back to the very start and work forward. How you probably didn't ask?. With a badly drawn map!: 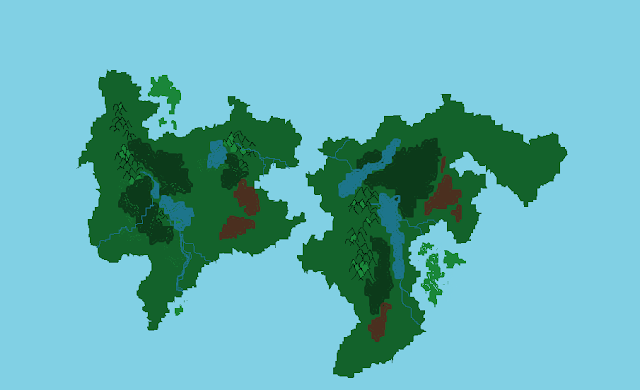 An as yet unnamed mass of land...drawn badly.

The idea I have come up with is to start with the above unnamed land masses. I can then use them as a canvas to work through the relevant historical gaming periods fleshing them out as I go, watching the land change and develop as kingdoms spring up, invasions happen, governments are overthrown and so on. So I can start by placing and campaigning with some ancient tribes, through dark age kingdoms into the middle ages and so on. In this way I can explore any period I wish in chronological order and track the actual effect battles have on the social conditions of the land in which they happen.Its fantasy gaming with a recognizable historical frame.  But how will I go about this from a mechanical standpoint?, well I plan to work as i normally do...very loosely!. I have created a few simple tools to help create narrative but they are really prompts to push this in certain directions and create a good amount of uncertainty. I will be needed to put flesh on the bones within the conditions determined by the following stuff:

First step within a new time period will be to roll 1D3+2 giving a number of campaigns to play through before that period will be deemed to be 'complete' as far as the lands history is conserned. I could always add more if needed (or I just fancy a few more). The results of the campaigns will become the history of the world itself.

For each campaign the following table will give a rough idea as to whats going to be happening: 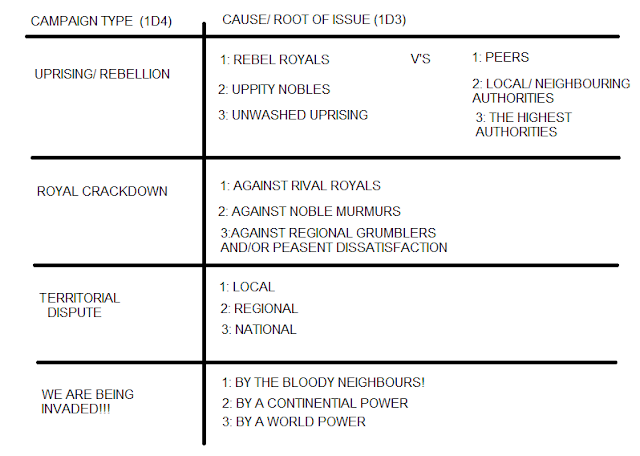 To help decide where things are happening or to just be able to randomize locatons if needed I have created a gridded version of the above map. 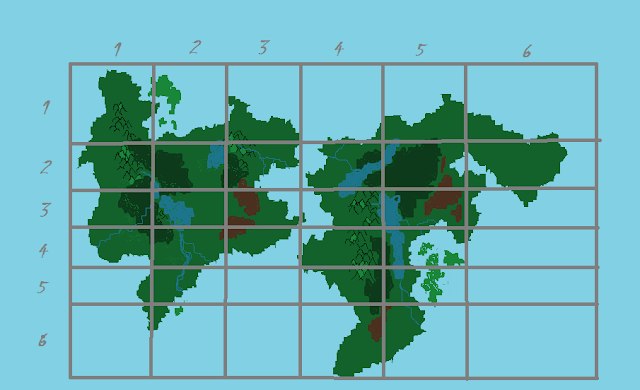 If I get sea I can always re-roll it!.

It also seemed appropriate to make the following to help determine the loose character of any notable leaders or personalities that may be involved to give a quick idea as to how they might react to any given situation: 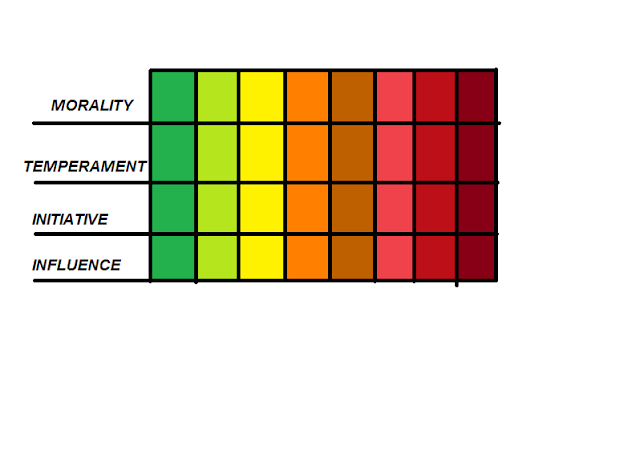 The above will be used by rolling 1d8 for each catagory to make a sort of character outline for the individual that will show how they may act under certain situations and pressures. It is ment to be pretty subjective, the idea being that the further towards middle the trait, the more average (or balanced) it is. For example an Influence score in the red may mean they are more likely to use fear and intimidation to garner respect where as if it was green they may be more likely to give people cocessions and grant demands to get their way. A person with red temperament will be quick to anger and  to use force where one in the green will be very laid back and prone to avoid conflict.
A campaign will be played using a number of linked games with whatever rules and scenarios i think will work best to create a narrative of the conflict being resolved, the results will be tracked on the map. Also I will use what I know so will lean towards British history to provide a framework to, well create a frame for all this.
I will also need your help for quite alot of this stuff!. Any thoughts and suggestions in the comments could well be applied and I have the feeling I will be asking for help in determining the next step to take quite often!. In other words feel free to chuck in any ideas!. If you have not yet realized I am making all this up pretty much on the fly so lets build a world together!.

The nest steps are to roll up the number, size and starting locations of a few ancient tribes, Paint up a couple of armies worth of tribesmen and roll for the number of campaigns...